The First Thing We Do #2

Yep. We are ripe. The D's have a chance but if they don't really help people this time the future looks bleak.

If I were in Biden's shoes

#1 - Fix the medical system. It's breaking us. We need some base level of medical care that's not tied to our jobs, won't cost a fortune, and will protect our assets when we have a heath event.

#2 - Stabilize the election system  - We won't survive another Cluster-F* like this. Work with the R's to fix it early in the term but don't roll it out until 2024 or even 28. That'll give everyone a chance to prepare.

#3  - Make peace with the Gun Owners. The R's most loyal supporters outside of of evangelicals.

#4 - Tax the Rich and spend the money making America a good place for the workers.

#6 - Tighten up on American Crapitalism

Trump likes to brag about building the greatest economy ever. I thought I'd take a closer look at some economic stats to see how it really went..

Gas prices
Everyone in Teabagistan thinks Biden will drive up gasoline prices, I've probably heard 15 people say it. Now prices may go up under Biden but Trump didn't do anything special to lower them. They went up in Trump's first two years then came down to about the same level as Obama's last year.
Really, they have been falling for years. The president just doesn't have much to do with gas prices outside of driving them higher by starting a war in the middle east. 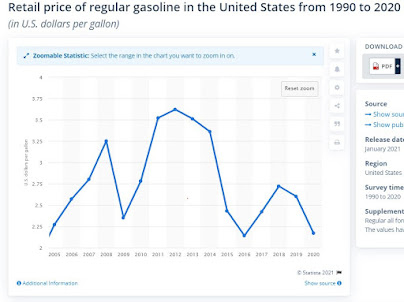 Stocks - Trump ran his mouth constantly about stock market levels but equity performance during his term doesn't stand out. 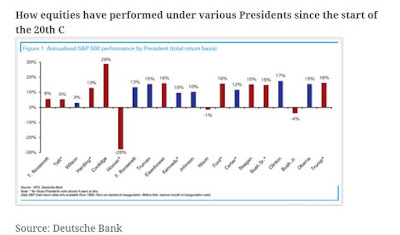 Here's the SP500. Can you pick out when Obama went into or left office? when Trump took over? 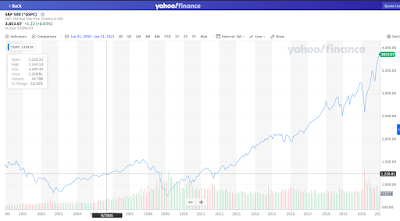 Coal
Saving coal was one of Trumps big campaign promises in 2016 but coal continues to tank. Natural gas and renewables are killing it. Trump was full of shit and most people knew it 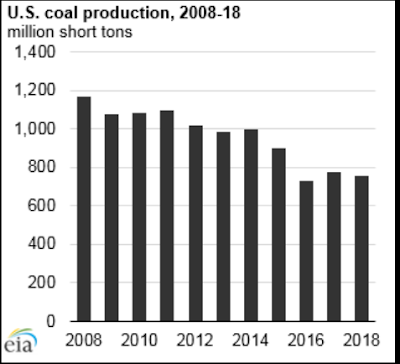 National Debt
He blew our debt out with the tax cuts and a half-assed COVID response. 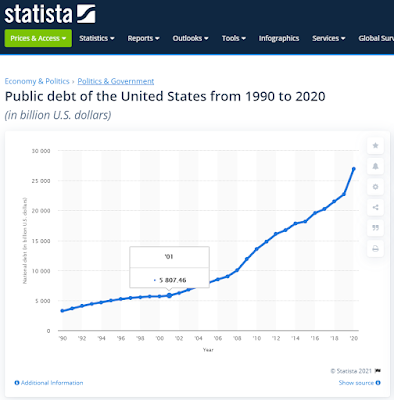 Inflation looks right in line with the past, 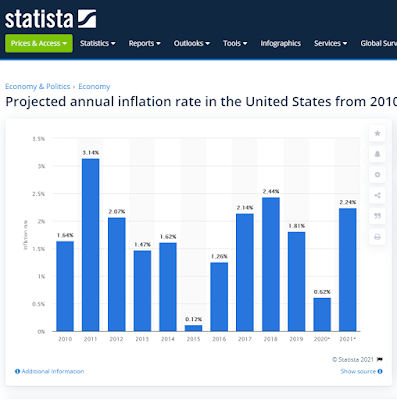 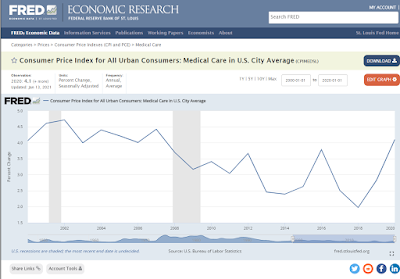 Another look  equities. Not much difference between Obama Trumo
Trade Deficit
Trump was going to eliminate our debt with great trade deals and tariffs but our trade gap was flat until it widened with COVID. 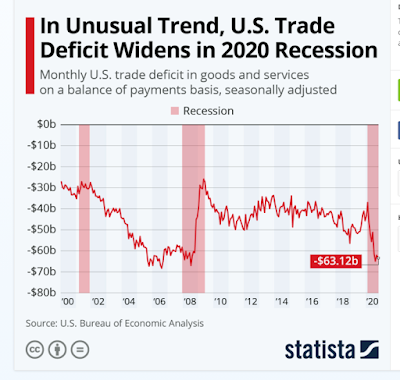 He did try to turn our farmers into welfare queens by paying them for the Soybeans they couldn't sell to China. 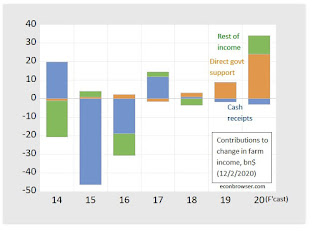 Unemployment rate stayed on the Obama trajectory until Trump botched the COVID response.
Again, can you pick out when Obama went into or left office? when Trump took over? 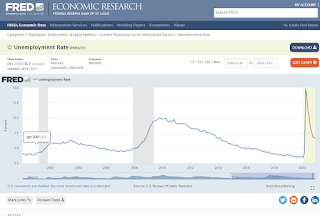 So not spectacular, just more of the Obama years except for debt and trade deficit which got worse.
Then COVID and 300,000 dead and a wrecked economy,
----- tnb No comments:

From Juan Cole - The first thing we do, let’s kill all the Coal Plants: How Joe Biden can save the Planet

NO. NO. NO. NO. NO.  Killing coal just gives the Rs something to run against and coal is going to die a slow death anyway.

The D's need to hit the ground doing things that help large groups of the American people.

Let the R's chase the D plans. Don't give them something to campaign against.
----- tnb No comments:

Any process that relies on institutional, societal, cultural, or political norms will eventually by corrupted by American Crapitalism.

Trump’s Pardons Show The Process Has Always Been Broken

The US will be ungovernable if media that call themselves "news" are allowed to make shit up for ratings.

In 2 weeks after it called the election, Fox News cast doubt on the results nearly 800 times

Trump and The Cult's Future

Where MAGA Insurrectionists and QAnon Followers Will Post Now

There is indeed currently a leadership vacuum in the pro-Trump insurrection movement.

If Trump hangs it up, and I think he will, the battle for who fills his shoes will be fun to watch.

As for Trump, it appears he’s going to be made an example of by being driven into real bankruptcy. The bank securing his loans has said they will no longer do business with him. He embarrassed his fellow elites, then he tried for an extremely incompetent coup and made them feel scared. They won’t forgive him for this. As with Martin Skrelli, you can hurt the hoi polloi all you want, but there’s a certain style required.

I think a bunch of rich, powerful people will (or already have) set Trump down and give him a talk that will be basically,.. "sit down, shut up, sink into a quiet retirement or we'll break you and put your ass in jail."

I don't think he'll cause much trouble, at least for a while.

Government Handouts - For the Land Owners

Farm Income during the Trade War 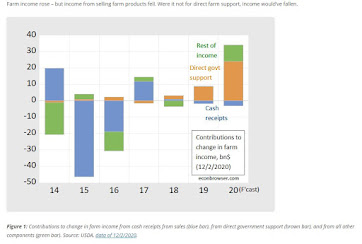 Inauguration day I had the pleasure of overhearing a couple of TeaBaggers talking politics. Talk about uninformed. It went something like this.

Biden will be dumbest president ever. Went to some low-budget college in Delaware

I hope Trump runs again, Biden will be too old.

It's just a plot to get her into the presidency

They wouldn't say terrorism during BLM but called the capital riot terrorism right away.

They wanted to defund police but now are spending millions for protection during the inauguration.

All that red on the election map. It was mostly red the last time but this time there were only a few blue spots.

Votes flipping in Georgia. 300,000 votes for Biden added in the middle of the night in Michigan

He fights those bastards.

Fake news. We don't watch it.

Biden will raise your taxes and hurt the poor.

He's going to cancelled the pipeline so gas prices will go up.

Damn. It made my head hurt.

Good Wired story about an unknown hiker found dead in a camp site.

Part #1 - About the unknown hiker

Part #2 - Finding him
Good story on Cryptos - don't know how true it is but a fun read.
Politics
No More Mister Nice on The Rs after Trump.
Debates, Fake and Genuine

With Centuries-Old Techniques, This Farm Is Preparing for the Future

‘Something Crazy In The Air’ (Fried Egg)

Why Freedom Became Free-Dumb in America

United States election officials say ‘unprecedented’ spread of misinformation has eroded trust in voting system. So ask yourself... where is this misinformation coming from? #1 Trump, #2 The Conservative swamp, Republican Politicians along with Fox, Newsmax, OAN, Rush, Hannity, etc... Spread by Facebook, Twitter, Parler, etc. The Ds are bad too but nothing like this.

Desperate not to take responsibility for what they’ve set in motion, pro-Trump media pivot to conspiracy theories

Yes, Trump helped. Right wing propaganda built the misinformation cult, an odd mix libertarians, gun nuts, religious nuts, and racists. Trump was programmed by it then took it over. It had been ripe for picking for several years. Sarah Palin, Michelle Bachman, Newt, Mike Huckabee, Santorum, along with others tried but Trump did it. The Fox viewers looked at him and said "My God, he thinks exactly like I do. I'll vote for that", so he took it over. Bill O' Reilly could have been the leader. Trump was in the right place at the right time. He is more a symptom than a cause.

DONALD TRUMP UNLEASHED HIS CULT ON AMERICAN DEMOCRACY  -Yes he unleashed them but again, he didn't create it. 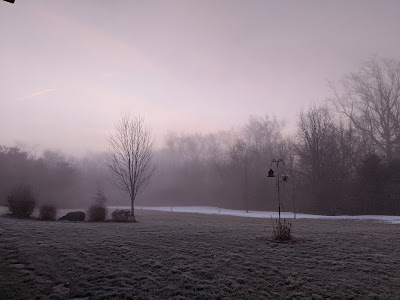 Fracking and the Oil and Gas Industry

Of the Corp, By the Corp and For the Corp.

Corporate Power and the Future of U.S. Capitalism

Misinformer of the Year: Fox News  - Don't forget the constant barrage of stories designed strengthen the cult by making their viewers hate the libs.

The Worst Predictions of 2020

Grading Trump on Foreign Policy - Pretty bad really. Breaking with old allies, aligning with corrupt middle east regimes, pushing the third world toward China, killing more brown people with US ammo, economic war against any country that didn't adhere to the american-crapitalist economic regime. So really, about the same as the past few US regimes but working more with evil states now. 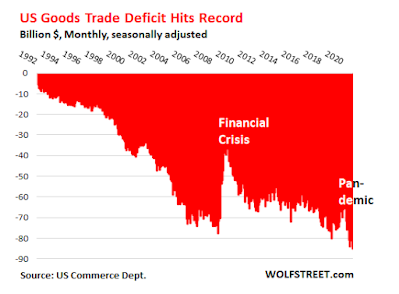 Can't Argue With This

IS IT A CIVIL WAR YET? 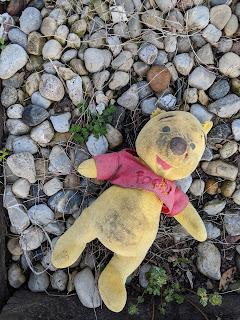 CAPITAL IN THE TWENTY-FIRST CENTURY - Worth watching. The line to remember

The swamp isn't just in DC.    How state marijuana legalization became a boon for corruption

From the Rude Pundit: This Year's Madness Might Just Fade Soon

Can't Argue with This.

The whole piece reads like an extended New Yorker cartoon, in which an evictee with empty pockets is about to dive after a rotten apple core in a dumpster, only to be blocked by a cauldron-bellied Harvard economist in a $3000 Zegna suit. Caption: “Actually, total household income relative to the economy’s potential sits at abnormally high levels.”

From our October 5th post when Trump did his escape from the COVID ward.

The guy in the front seat looks more like the Trump who plays golf than the guy waving to us. 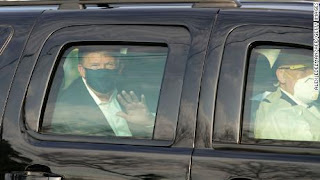 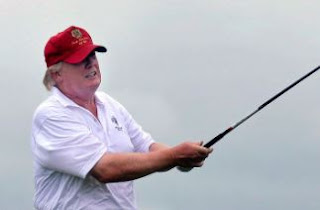 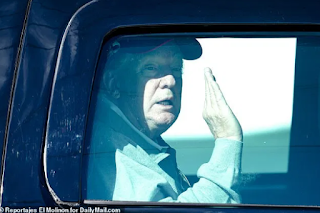 I'm not sure where this picture is from, found here, but this shot looks like the guy in the front seat of the earlier picture. I'm convinced the guy wearing the mask and waving to us in the first shot is not Trump.

More US tax-dollars to help Israel. US dangles billions for Indonesia normalising ties with Israel

Hard to argue with this. Opinion: Trump pardons corrupt lawmakers, but the real scandal is that the capital is still a swamp