I really like David Horsey's cartoons. They remind me of the old Mad magazines. Here's his 40 favorite of 2010. Below are a couple i liked

On government regulation,.. or lack of. 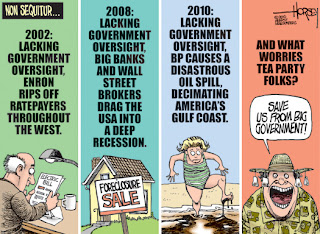 Americans do have short political memories.

Of course, the Right would say these industries were regulated and these incidents just prove that government can't do anything thing right. In reality the Right would be wrong because the regulators had been captured by the big money of very industries they were supposed to regulate and real regulation had ceased to exist.

To provide more evidence that government can't do anything right, the Left would want to put a new layer of regulation over the top of the existing, captured regulators increasing the size and cost of government which would be wrong because these new regulators would eventually be captured too, completing the "government sucks" circle.

An efficient government would fire the captured regulators, fix the laws that allowed the capture, reorganize the department so that it was really a regulator, throw the corrupt business leaders in jail (and maybe a few regulators too), dissolve the company, sell off its assets, and then hold a press conference to say that we're not putting up with this shit any more and this will be the standard operating procedure in this kind of case. I'd put the percentages closer to the following (from top to bottom), 10% have a clue, 35% don't and the rest don't care.