For those who want to return to the good old days. The graphic below shows what taxes were like in 1950 compared to 2015. (found at The Big Picture.) Also, a good article on  Lies about Taxes.

Basically, since the 1980s we've, well... US leadership....has been cutting individual and corporate income tax rates, which mostly affect the rich folk while increasing other taxes like social security, gasoline, sales, cigarette, etc that mostly affect the working class. Over the same time they've forced people to pickup more of the cost of government niceties like public schools, state colleges, government supplied services like water, sewage, and trash pickup, retirement saving, retirement medical care, etc. And,... they convinced a good portion of the people that it's the really poor folk's fault that we can't have these nice things anymore.Fuck 'em. It's time to raise taxes on the rich. 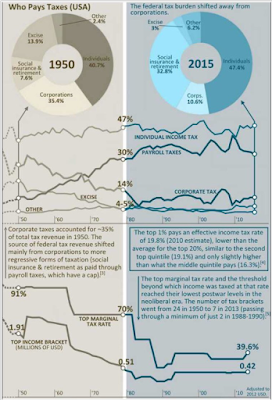 
Pelosi: Progressive Dem wing represented by Ocasio-Cortez is ‘like five people’ The Hill (resilc). Versailles circa 1788…..

The Israeli-Palestinian peace process is dead. An expert explains why.


“If your solution does not include self-determination for everyone, and basic civil, human, and political rights for everyone — it’s not a real process.”

Creeping Fascism - A Land Uncharted: the Persecution of Julian Assange


Indeed fascist leaders around the world, along with the military/surveillance establishment and their neoliberal enablers, are celebrating the silencing of Assange. After all, Wikileaks has represented a major thorn in their sides for a decade. From Netanyahu to Duterte to Bolsonaro to Modi and even Putin, all will be emboldened to expand their own attacks on press freedom. All of them will feel empowered to be even more unrestrained in their brutality.

TRUMP: ISRAELIS SHOULD BE IMMUNE FROM INT'L CRIMINAL COURT PROSECUTION


“Since the creation of the ICC, the United States has consistently declined to join the court because of its broad, unaccountable prosecutorial powers; the threat it poses to American national sovereignty; and other deficiencies that render it illegitimate,” the White House said in a statement it attributed to Trump. “Any attempt to target American, Israeli, or allied personnel for prosecution will be met with a swift and vigorous response.”

Bernie on Fox - Lots of talk about Bernie going on Fox. Fox reported it pretty well and a lot of progressive types think Bernie got his point across to the Fox Cult.  I'm not so sure.  At this time of the election cycle this interview helps split the Ds so really helps the Rs. You can bet the coverage would be different if it was Bernie against Trump. And Yeah, he did get his message across but I don't really think the Fox viewers got it, read the comments on the link above. The cult is trained to react against this stuff. It's like Fox did a straight-up piece on the bad guy in professional wrestling.


"The Republicans and Democrats don’t differ very much, do they? The Dems don’t offer any of the following, for example — retirement, healthcare, affordable education, childcare, safety nets, and so on. Instead, both parties seem to believe in more or less the same things — markets as the solution to every problem a society has, populated by greedy, self-interested, profit-maximizing “consumers” on the one side, and corporate “people” on the other. Witness Obamacare — and its legacy of ruin (life expectancy’s falling, my friends.) So the Democrats don’t oppose. Americans are offered a set of false choices — between implosion, the Republican way, or collapse, the Democrat way. Neither of these, though, amounts to progress. The result is the functional equivalent of one-party rule."

".. The answer to everything is markets, profits, advantage — and self-interested “consumers” and corporate “people.” But these answers have failed catastrophically — just the same way that Soviet communism did. They have left people astoundingly worse off, especially compared to their peers in any other rich country. They have created a broken nation of powerless, impoverished people."

Dumb
Dumbest thing you'll read today....Hard to believe he was being serious here.

The man is an idiot:  Trump Asks China to Shift Soybean Tariffs to Something Else
----- tnb