How the House Armed Services Committee, in the Middle of a Pandemic, Approved a Huge Military Budget and More War in Afghanistan


"WHILE THE COUNTRY IS SUBSUMED by both public health and an unemployment crisis, and is separately focused on a sustained protest movement against police abuses, a massive $740.5 billion military spending package was approved last week by the Democratic-controlled House Armed Services Committee. The GOP-controlled Senate Armed Services Committee will almost certainly send the package with little to no changes to the White House for signing."

He can’t learn … and now neither can America


"His presidency has revealed that his office is much too powerful. As long as he has the support of a one-third plus one members of the US Senate a president who cares nothing for the constitution or his own legacy is completely unaccountable during his term of office. This has been demonstrated for everyone to see now. And it is a big problem.

The flip side of that is that an incompetent president has now been shown incapable of using that power to deal with a national crisis, which is why those powers were granted in the first place. We have the worst of all possible worlds in Trump.

This administration, a reflection of Trump’s own chaotic and disordered mind, has refused to muster a national response, largely because the people he’s appointed are incompetent but also because much depends upon a president leading the government and delegating tasks to experts. Trump can do neither because he can’t understand the nature of the crisis or what needs to be done. He has instead fallen back on magical thinking and hoping for the best. (He says over and over again the “the virus is just going to go away.”)

I have written a hundred times over the past four years that “Trump can’t learn.” This is obvious. He doesn’t even try to hide it. And now we know that when the extremely powerful office of president is occupied by someone like that, America can’t learn either."


"Here is the deal, you can walk around and flap your jaws “I am a Christian”. “I am a conservative”. But someday, if you believe in Christian religion, and you think you’re going to meet St. Peter or whoever the F—, you’re going to have to answer for your actions in life. It’s not going to be enough to flap your lips and say “I’m a Christian conservative”. That’s not gonna cut it anymore. WTF are you gonna say when he tells you 3 people died because you couldn’t put a F’ing mask on?? What are you gonna say?!?!?!? If you believe in religion, you better F’ing think about what your answer is gonna be when that day arrives." 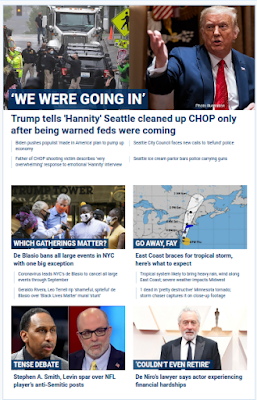