A new Great Game has begun in the Eastern Mediterranean

I don't think so. I think Mish gets it right. Nonsensical Notion "Trump Brought Peace to the Mideast"

Neither Bahrain nor the UAE have ever been involved in any of the wars of Arabs against Israel. Where is the peace deal there?

The main source of violence in Israel for the past 45 years has been in the reaction Israeli treatment of the Palestinians. Where is the peace?

This deal sets the stage for Israel to complete an illegal annexation of the West Bank. That will bring violence, not peace.

The US still has troops in Syria, Iraq, and Afghanistan, all against the  will of those countries. Is that peace or war?

I see this as an alignment of states with a common enemy, the oppressed Arab people.

The greatest Health Care system in the world. GAMA!

"And they are only too happy to take money from foreign governments to influence our elections."

I wish everyone would stop talking about foreigners using social media to influence our elections. I'm sure they do to some extent but here are the Top 10 Facebook posts today. 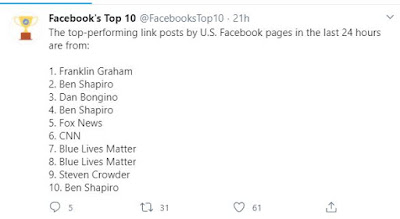 A pain reliever that alters perceptions of risk

"Hold my Tylenol and watch this!"