Trump, Bolton, and Tucker and Fox

Read the paragraph below about Bolton working in right-wing Republican administrations since Nixon. Now remember that two days ago Tucker Carlson called Bolton and "man of the left" and Fox News chose to put Carlson's quote near the top of it's front page.

Who is really "Fake News"  (from  StoneKettle Station on Trump-Bolton)


"Bolton began as an intern in Spiro Agnew’s office. He was a vocal supporter of the Vietnam War – but, like many conservatives, actively avoided going to war himself, saying, "I confess I had no desire to die in a Southeast Asian rice paddy. I considered the war in Vietnam already lost." He later explained his comments by suggesting that he would have gone to Vietnam if only liberals hadn’t “made certain we would not prevail and I had no great interest in going there to have Teddy Kennedy give it back to the people I might die to take it away from. ” Eventually Bolton wormed his way into the Reagan Administration and was involved in everything from the “War on Drugs” to Iran-Contra. And like Cheney, Rumsfeld, Wolfowitz, and all the other foul distillate from those years, Bolton returned when George W. Bush took office and he was right back to the same old tricks."

Israel accused of planting mysterious spy devices near the White House - Why do you need to spy when you own most of Congress, Trump, and the VP? Probably related to the Trump-Bolton bust-up, and the Israeli election. 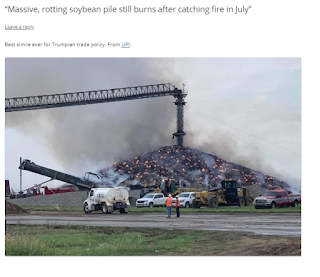 The Dogs in the Street Know - English and American foundations are cracking.


+ By almost every standard Biden is a worse candidate than Hillary Clinton: he’s frailer, dumber & has a more tarnished record. His saving grace, as far as I can tell, is that Biden is so boring, so lacking in inspiration, that he can’t even inspire people to hate him as passionately as they did HRC.