Average is Over: GDP Edition - and if you exclude the debt-fueled housing bubble, there hasn't been a year of above average growth since the Clinton years. 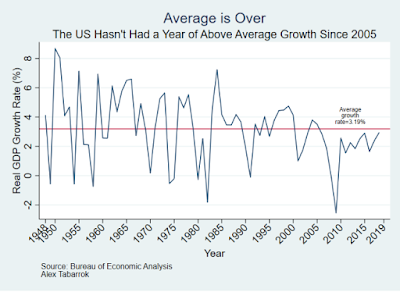 Within the last two weeks, I've read that the Saudis might cut production because they need oil prices to rise, that the world was turning against the Saudi war on Yemen, that Netanyahu was in the election fight of his life and almost everyone was expecting something special to boost his chances, that Israel was freaking out because Trump was getting too close to negotiating with Iran, and Trump has been flailing a bit more than normal at home.... and now, BAM!!, right on cue, an attack that helps all of the above. Imagine that.

They'll find an Iranian passport in the drone wreckage any minute now.

.. or I guess in this case, "R" elite - Frank Schaeffer Shreds Falwell, Jr.: 'Just Another Con Artist Grifter Cashing In - Can't argue with that.

A $5 billion fine won’t fix Facebook. Here’s what would. We can do better than fine companies that break the law. - I think putting a few executives in real prisons would help.

Jeremy Corbyn could leak classified US intelligence to Russia and Iran if he becomes prime minister, think tank warns Donald Trump - Man,... they are pulling out all the stops against Corbyn. First anti semitism, now he could leak to Russia or Iran. What will they come up with next?