Good article. About the UK and with some slight tweaking would work just as well for the US-Trump.

David Graeber: The Center Blows Itself Up: Care and Spite in the ‘Brexit Election’

Government of business, by business, and for business

False News Spreads Faster than Real News - But I think we knew that. The real issue is removing the false belief. Like woodworking, where sanding once across the grain will leave a scratch that will take 20 strokes in the right direction to remove.


"The irony is that the media is one of Trump’s foremost targets of abuse. He calls the press the “enemy of the people,” yet the very outlets he demeans regularly bend over backward to cover him in the most favorable possible light."


“LIKE, I’LL TUNE IN WHEN THERE’S TWO WEEKS LEFT”: WHY TRUMP HAS A HUGE ADVANTAGE OVER DEMS WITH LOW-INFORMATION VOTERS


".. their pieties usually don’t include the fact that political media culture is a bubble of its own, a cocoon of college-educated and left-leaning professionals who read the same things, watch the same shows, and liked your last tweet about Lizzo."


“Flood the zone with shit”: How misinformation overwhelmed our democracy

How Trump took over the Fox News, Right-wing media cult - Trump’s Art of the Steal

Reminder: If You Defend Trump, You're Not Just Defending a Criminal. You're Enabling an Idiot.


There is nothing of value that these two can add to any conversation. 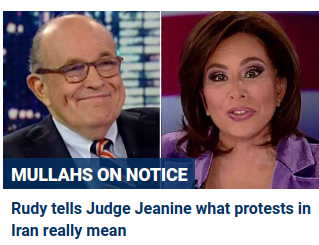 Fox headlines on the eve of the impeachment and a day after Giuliani's Ukrainian goons hit the news. 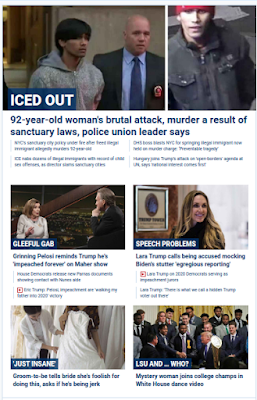 What CNN should be reporting is who are the donors? - Trump recounts minute-by-minute details of Soleimani strike to donors at Mar-a-Lago


"While nobody can read Trump’s mind, the president is plainly a transactional egomaniac who himself once said of a report that Adelson was going to give Marco Rubio money that “he feels he can mold him into his perfect little puppet.” The media has a responsibility to examine the extent to which Trump has become Adelson’s tool, and Bernard Marcus’s and Paul Singer’s — the three billionaires who led Trump to trash the Iran deal. The media won’t touch the angle, and that’s a dereliction. Netanyahu was the only foreign leader consulted on the assassination, the Times tells us deep in its coverage. But imagine if this were Russia getting its wish. Or the Koch brothers buying a politician. Jeff Morley was doing fine journalism by showing how Israel had targeted Soleimani. Max Blumenthal was making a fine satirical point when he said that Trump mispelled the Israeli flag when he posted an image of the US flag post-Soleimani."