Hey Google. An opinion piece by a Fox Propaganda person is not headline news. 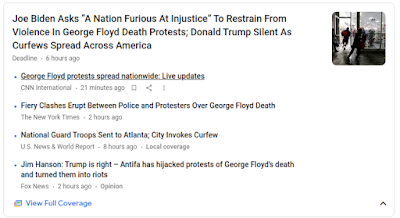 
"The conspiracies put forward in the US to lay blame for the protests on a complex organized network is part of a pattern of shifting that has become increasingly common in America. Rather than seeing entrenched racism and police brutality as fueling protests, including police violence against journalists, there is a preference to see a hidden hand that can be more easily labeled as an enemy.

These are tactics that were once more common to the Soviet bloc countries and Middle Eastern regimes when trying to explain protests. For instance, the Assad regime asserted that legitimate protests in 2011 were an imperialist conspiracy. Today, the situation appears reversed: In the US across the political spectrum, there is a preference to see protests as part of a cartel, white supremacists, antifa, Russians and MS-13 gangs, as opposed to local grievances bubbling over after a very visible sign of police brutality."

Who Exactly Is Doing the Looting, and Who’s Being Looted?


"We live in an Orwellian era, in which working-class people pilfering convenience store goods is called “looting.” Rich people stealing hundreds of billions of dollars, on the other hand, is just well-functioning “public policy.”

I'm not sure we should ever let our police train in Israel.  Israel police kill unarmed Palestinian in occupied East Jerusalem

Be careful about what you breath!

How the coronavirus spreads in those everyday places we visit