Tunes
SRV did his best work with that blue thing on.

About That Swamp?
NURSING HOME MAGNATE COZIED UP TO TRUMP AS DEATHS ROSE IN HIS FACILITIES
Nursing homes linked to major Trump donor Eliezer Scheiner received over $27 million in Covid-19 funds even as residents died amid poor conditions.

COVID
Opening Schools in Teabagistan? Here's what happened in Israel.
OPENING SCHOOLS IN ISRAEL
MEDIA
The Fox News Front page until the election. this from 8/5/2020 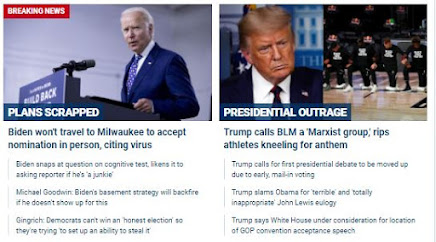 The rise in inequality over the last 40 years has shown that in general money flows to the top and piles up there. If the government just bailed out the people on the bottom, they would spend it and it would still end up in the rich folk's pockets but the people would get some benefit from it. The poor don't ever seem to get much from trickle-down policies.