Your Navigation App Is Making Traffic Unmanageable - The apps may have created some new problems and been detrimental to some people or areas but its hard to see how the gains they've given travelers and commuters isn't worth the few problems. A little like the globalization issue, we can't see the forest for the trees. 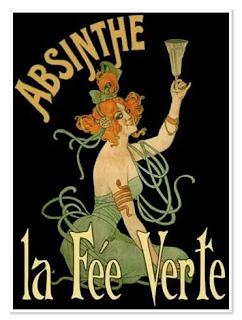 Sacklers threaten to scrap opioid deal if they aren’t shielded from lawsuits - Just take about 90% of their cash and put a couple of them in jail. I think it would lead to much better behavior from Corporate America.

The ugly joy of the Israeli election


'There is only one way out of the ugly place you have painted yourself into, democracy."

But I get the feeling that ain't gonna happen.

Why Republicans Play Dirty:  They fear that if they stick to the rules, they will lose everything. Their behavior is a threat to democratic stability.


Decent article. A couple of things of note:

Beneath Contempt - A good short, bashing the Saudi war mongering.

I can never really grasp who is leading who in the US-Saudi-Israeli war vs Iran?

Is it the Saudis vs Iran with the US and Israel being dragged in due to oil and common enemy? That's the way link above makes it sound. It could be driven by Israel with the Saudis in the mix because of the Shia-Sunni thing and the US involved because, well, we back anything Israel does. Some would claim it's the US leading the charge with the Saudis and Israelis basically playing the part of US allies (and bases) in the area.

I don't know, my current best guess is the Saudis and Israel (mainly Netanyahu) have an uneasy, strong-men-with-a-common-enemy agreement to fight Iran in any way possible. The basic goals being, Israel gets all Palestinian land and gets to sell natural gas to Europe while the Saudis get to be the world's leader of Islam and oil. I believe Israel is the primary driver in this alliance with a more agitated leadership and much better military and espionage setup. Also, Israel is more belligerent to its neighbors while the Saudis, except for Yemen, are more belligerent to their own people.

The US is there because Israel is a traditional ally and still has a lot of support from US voters, especially the Christian right and Congress.  The Saudis have support from US corporations with an eye on their oil or at least keeping Iran oil off the market to keep prices up.  Also, the US business class likes war on any any state that doesn't take the US capitalist model, Cuba, Venezuela, Syria, North Korea, Iran, etc. To call your government something other than "American Style Capitalism" is to invite attack.

So in a way it is an alliance of the three with some common goals. Still, I think it's shaky at best.

The Saudis and Israelis are natural religious and territorial enemies. If the Iran issue is ever resolved, there will be a Saudi vs Israel issue.

The American people seem to be growing weary of both the Saudi violence and the Israeli oppression of the Palestinians. I can see a day when we decide we've had enough of wars in the middle east and just get the hell out. It is a few years out though.

For now,  as an American, I'm damned embarrassed to see my country in an alliance with the two most thuggish states on the planet.

We can do better.

Why we shouldn't have employer paid healthcare, they can turn it off if you don't get in line.


”GM is cutting off striking workers’ health care coverage effective today. The UAW will now pick up the bill for their members’ continued healthcare through COBRA"

David Graeber: “The paradox of modern work: 1. Most people’s sense of dignity and self-worth is caught up in working for living; 2. Most people hate their jobs.”  (found here)

TNB:  "The paradox of US healthcare: 1. Most people like their doctor. 2. Most people hate their health insurance."


Why They Hate Us.

Just a couple days after the Saudi Oil field explosions and not a word about it on US media.

Media - Keeping the Cult in Line

Not a huge news day, Trump-Biden-Ukraine dominate US news but there are also Protests in Egypt and Hong Kong, the Israeli election, Iran but Fox is keeping the cult in line with this 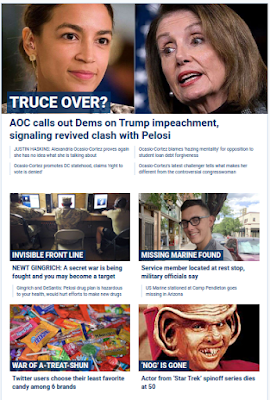 The D's are a mess, AOC is dumb, Newt G scares'em (by the way.. fuck Newt), Military good, and candy for your brain.

Media - Keeping the Cult in Line #2

Fox has regular headlines about shootings and violence in Chicago but last night six people were shot in downtown indianapolis and there's not a word about it on Fox. I guess violence in the middle of Mike Pence's home state isn't as important as violence in that scummy town of that Obama dude.

Media - Keeping the Cult in Line #3

Fox has very little about the Israeli election. You'd think the cult members would want to know how one of their favorites, Mr. Netanyahu, is doing.